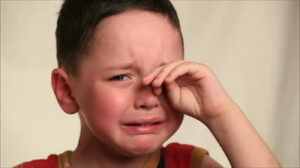 "Behaviours" in children often first show up as inappropriate meltdowns and tantrums. The root cause is often because there are links in their brains that have not grown at the same pace as the rest of them. Their development is “asynchronous” in other words their development has not been all at the same pace. Sometimes they are their age, sometimes they are 30 and sometimes they are 1 or still in utero. This can be very frustrating to try sort out. Many parents and teachers are baffled and the thing they say is: "I know the child can do this, but they just won't." or I have also heard " I know they can, but they want to annoy me."

What we have found is that when we grow the missing pieces in their brains (by doing specific exercises with specific parameters - because muscle firing causes brain connections to grow. https://www.ted.com/talks/daniel_wolpert_the_real_reason_for_brains?language=en) this conflict resolves.

Most people want to know why there would be missing pieces. I only have a partial answer but it seems to be enough so that a plan to correct it can be made from this. The clients who are successful with what we do show up with a few gaps. The biggest gap relates to their head control. The mechanics are that their head is not stable on their neck. The exact reasons for the instability vary by child, but can often be linked to the child not feeling safe at some point. This will induce a defensive stance in their muscles and limit their head-control from developing as they need it to. That will trigger a reflex action that increases their cortisol levels and makes them susceptible to more meltdowns than is good for relating. The reflex I am referring to is one that should have done it’s job by 3 months of age. It is called a Moro reflex and it causes a cascade of other primitive reflexes to remain inappropriately active.

The end result of this poor head control and thus inappropriate reflex activity, is that the child has to work inordinately hard to function. That will make them tired and hungry, and all the symptoms that follow from that scenario are very predictable.

The energy drainers quiz is set up to find the minutest reflex activity that could be showing in a person. One should score 0 on that quiz. That is the most optimal for not using energy for unnecessary things. But there are some easy things to do if you score low that involve moving more as this is what grows brain networks. Cultural Dancing, Gymnastics, Karate, parkour are all amazing for growing the brain and should be part of what children do anyway. Competitive sport is NOT on this list - as that is about fight or flight not about finding out how one's body works and enjoying that.

Unfortunately if you score high, there is no real easy way to resolve it without some professional intervention. All sorts of books are now written on Primitive Reflexes and the exercises you can do. If you Google it or look up on You-Tube you will find a whole lot. You may absolutely try them all.

The reason many of these do not succeed in solving the problem quickly is that they deal with in isolation – as if the Moro reflex is single entity. It is not. It part of the limbic continuum. Limbic system is the area of the brain dealing with emotions and a person’s sleep, freeze, flight or fight registration; and the person's ability to attach to themselves, significant others and their community. There are at least 4 reflexes involved in resolving the meltdown symptoms if there is no huge trauma to resolve first, together with the growth of the nerve nets along which these reflexes function. Just doing the starfish for a year, everyday, will not totally change the symtoms in all areas.

The other one everyone seems to think should be worked on is the ATNR. But working on that in isolation too has several issues as its resolution can be directly linked to resolving why the person with the problem does not perceive their own midline correctly. This is a larger and larger issue with more babies than ever having plagiocephaly (poor shaped heads) and torticollis.

So I am not withholding information that is easy to find yourself. I am telling you that if these things are issues, someone who has good knowledge about them should stand next to you and coach you. Neuro-develpment is simple in the same way that quatum physics is simple.

I had an ATNR that would not resolve. So in my case when it activated I lost my ability to find words, I showed dyslexic problems with switching numbers and letters, even sounds at times, I would stop understanding when someone spoke to me – felt like English suddenly became Greek. Resolving it was related to a trauma I had at 4 years old in a dentist office, where I fought the anesthetist putting on a gas mask to “put me to sleep”. The position I fought in was the ATNR and it “locked” in my system till I figured it out last year. The trauma had to release before the ATNR could settle down and not be inappropriately active.

The greatest take home was that these are not simple responses that are being stubborn. They exist for a reason and often it takes quite some skill to untangle a neural entanglement. And if trauma happens to be part of the scene having a trauma informed therapist is crucial.